Wipe that greedy grin off of Big Pharma's face! 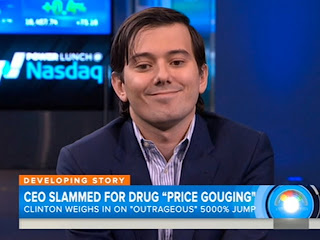 Big Pharma is gouging us and everyone knows it. Even Donald Trump promised to do something to stop skyrocketing pharmaceutical prices. But right now, there is a Bill before Congress that could finally break the drug corporations’ overwhelming monopoly -- and we need to make sure it passes.

Drug companies have gotten away with brazen acts of extortion for too long. From “Pharma-bro” Martin Shkreli’s 5,000% price hike on a cancer drug to Mylan’s executives pocketing hundreds of millions off its sixfold increase to the indispensable EpiPen, this has to end.

That’s why we’re working with a fierce coalition of partners to break up Big Pharma’s monopoly once and for all. With the people power behind Daily Kos, Public Citizen, Corporate Accountability International and we have a real opportunity to win.

Let’s come together to make sure The Affordable Prescription Drugs Act passes now so we can put a stop to these injustices once and for all.

Our health system rewards drug companies with virtually unlimited control over the market and they use it to charge Americans more for lifesaving medication than anywhere else in the world.

Americans are already suffering from the greed of pharmaceutical corporations. Nearly 1 in 5 U.S. residents do not fill their prescriptions because they simply cannot afford them.

This Bill, the “Improving Access to Affordable Prescription Drugs Act,” is currently sponsored by 16 prominent Democrats including Al Franken, Bernie Sanders and Elizabeth Warren, and aims to roll back drug company monopolies and hold Big Pharma to account for price-gouging.

If it were up to ordinary people, this Bill would pass instantly. An overwhelming majority of Americans agree: Congress must act to stop Big Pharma from extorting the sick, disabled and dying with ludicrously high prices for medicine that could save their lives.

But Congress has been infiltrated by the power of Big Pharma’s lobbyists. That’s why we need to show Congress the power of the people. It’s the only way we can ever get a system that works for us, and not for drug company CEOs.