Trump's first 100 days of "transferring political power back to the people." Um...what people? 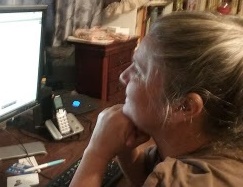 Somehow I got on the CONSTITUTIONALLY e-mail list. I was curious, so I checked out their statement from President Trump...

"In my first 100 days, I kept my promise to Americans One hundred days ago, I took the oath of office and made a pledge: We are not merely going to transfer political power from one party to another, but instead are going to transfer that power from Washington, D.C., and give it back to the people."

What people? He certainly isn't listening to me or the millions of people who are protesting his policies. Since Trump has taken office, I have been diligently following his speeches and actions. His executive orders, the massive tax cuts to the wealthiest Americans, and his budget cuts to the EPA and organizations that help low income Americans is proof that he is giving power back to the wealthiest 1% - including those he has appointed to his cabinet.

I may have just gotten myself on Trump's trouble-makers list because I responded in the comment section with a quote from former Secretary of Labor Robert Reich:

Trump is transferring power (money) that supports services for the American people to the richest Americans. "It’s the biggest declaration of class warfare – Trump’s class against average Americans -- in history.

Trump won’t just cut corporate taxes from 35 percent to 15 percent – a huge boon to the shareholding class (remember, the richest 10 percent of Americans holds 80 percent of the entire value of the stock market). He’d also cut the individual taxes paid by partners in hedge funds, private-equity firms, and real estate empires like, um, Trump’s — from 39.6 percent to 15 percent. This is a giant windfall to the richest of the rich. And he’d repeal the estate tax – paid by the richest 2 percent. Oh, did I say that Trump is now proposing another repeal of Obamacare that would save America’s wealthy another $300 billion a year in taxes?

The biggest winners: Donald Trump, Ivanka Trump, Jared Kushner, Robert Mercer (Steve Bannon’s funder at Breitbart) and his daughter Rebekah, who is bankrolling a super PAC airing pro-Trump ads, along with Steven Mnuchin and all the other billionaires Trump brought into the his administration, including Gary Cohn, Rex Tillerson, and Betsy DeVos, as well as others on Wall Street and in corporate suites."

I got this good matured response:

Good Lord Woman - Get some faith in others- To me you are 90 % wrong with every thought you have...

My response to his response...

Everyday I follow President Trump actions and the bills being proposed in Congress. I listen to Trump's speeches and then I do my duty as an American citizen and research it further - to find out how those bills will affect me and the American people. My comment is a quote from an expert in finance, former Secretary of Labor Robert Reich. I found other sources that confirm his position. I don't expect you to take my word from it. But, please, do some independent research from unbiased resources (rather than the conservative or liberal slanted news sources.) I would greatly appreciate it.