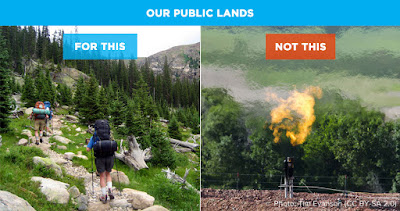 This week, one of your US senators, Jeff Flake, tried to give drilling companies a never-ending pass to leak methane gas pollution on our public lands. Thankfully, with help from John McCain and 50 other senators, we stopped this attack by the oil and gas industry, and sent a message loud and clear: our health is not for sale.

Defeating this attempted roll back of the methane standards was a major victory for our health and climate. We applaud Senator McCain for putting the people of Arizona first. Senator Flake, on the other hand, showed yet again that his true loyalties lie with corporate polluters. Call Sen. Flake today to tell him that his vote to endanger our health was unacceptable: 202-224-3121.

Here's the background of what just happened: under the Obama administration, the Bureau of Land Management (BLM) finalized protections last year that require companies extracting oil and gas from public lands to reduce their methane emissions. These standards are not only a big win for public health and the climate, but also for job creation.

And yet, Republicans in Congress tried for months to use a dangerous and powerful tool to roll back these important protections to satisfy their fossil fuel backers. The Congressional Review Act (CRA) allows Congress to override recently issued rules, going back months under the Obama administration. The CRA can not only block current standards, but can also prevent any similar standards to ever be issued -- letting polluters off the hook indefinitely.

When the House of Representatives voted to overturn these safeguards earlier this year, the oil and gas lobby figured they would be able to finish it off quickly in the Senate. But thanks to enormous grassroots pressure from people like you calling, writing and meeting with your legislators, the vote was delayed several times. Ultimately, every Democrat and Independent in the Senate joined with three Republicans to vote down the measure, 51-49, for a big victory on Wednesday!

Attempting to eliminate these standards to rig the system for polluters was a shameful abuse of power and an affront to all Americans. We are grateful to Senator McCain and others for voting against this dangerous attack on our health and public lands. Senator Flake had a clear choice, yet voted to put polluters ahead of his constituents. Call now to tell him that his vote against the methane rule was unacceptable: 202-224-3121.

Lena Moffitt
Sierra Club
Posted by Jana Segal at 8:20 AM