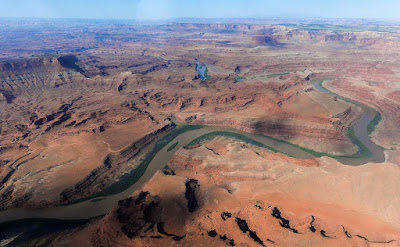 As some of you might know, my husband Dan and I have been working to restore Tucson's depleted groundwater and rivers. We practice rainwater harvesting in our own yard and Dan volunteers for Watershed Management Group.  In Tucson, we have been suffering from a 20 year drought. As more and more states experience droughts, it becomes even more vital to protect our water sources. One of the protections we have for our rivers and streams is to designate a piece of land a National Monument.

President Trump recently signed an executive order that could undermine protection of millions of acres of public lands and waters central to our nation’s natural and cultural heritage.

According to America's Rivers:

The order directs the Department of the Interior to review all national monument designations of 100,000 acres or more created since 1996 and suggest modifications. Many of the 26 monuments impacted by the order could suffer the removal of protections for rivers and streams and their priceless natural, cultural and historical values.

Located within these national monuments are rivers and streams that provide clean drinking water supplies for downstream communities, spiritual sites for Native American tribes, fish and wildlife habitat, and opportunities for fishing, boating and hiking.

Earth Justice is taking up that cause:

The first monument in his crosshairs is Bears Ears National Monument—sacred land to five sovereign tribes and home to ancient cliff dwellings, Native American cultural sites, jaw-dropping beauty and iconic wildlife. It’s unconscionable, but the faster they can overturn or shrink Bears Ears, the faster they can give it away to oil, uranium and other industry interests.

But first, Zinke has to open his review of Bears Ears for public comment. You have a narrow window—just until May 26—to urge him to keep this iconic public land intact.

According to Zinke, the review will lead to a report on Bears Ears National Monument in 45 days and a larger report on national monuments in 120 days, though it remains unclear what concrete recommendations for action those reports will make.

Any attempt to reverse or shrink a monument designation by the executive branch is unlawful under the Antiquities Act. Only Congress has the authority to modify a national monument.


Urge Secretary Zinke to follow in the footsteps of his hero Teddy Roosevelt by upholding our public lands and keeping Bears Ears National Monument intact and protected under the Antiquities Act.

The designation of Bears Ears marks the first time in the 110-year history of the Antiquities Act that Native American tribes—the Hopi, Navajo, Ute Mountain Ute, Zuni and Ute Indian tribes—have come together to ask a president to designate a national monument.

We can’t let Bears Ears become the testing ground for dismantling the Antiquities Act. An attack on one national monument is an attack on them all.

The designation of Bears Ears marks the first time in the 110-year history of the Antiquities Act that Native American tribes came together to ask a president to designate a national monument. Diminishing this land is an affront to their voices as well.

Please, leave your comment here.
Posted by Jana Segal at 8:05 AM