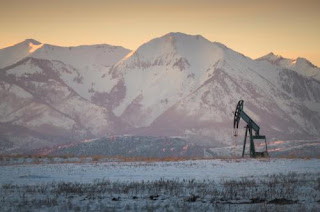 We did it!  A rule that cuts pollution from oil and gas development lives on.

In a congressional showdown on the Senate floor, support for clean air and public lands prevailed, a huge blow to the fossil fuel industry.

Today we pause to recognize a hard-fought win. Tens of thousands of Americans wrote, called and tweeted at their elected officials, asking them to stand up against polluters and President Trump's fossil fuel agenda.

Many big fights remain on the horizon, from keeping drilling out of the Arctic National Wildlife Refuge to preserving Native American tribal culture in Bears Ears National Monument. The stakes are high, but we feel more confident than we have in a long time, just knowing we have supporters like you.

I'm proud of Senator McCain for standing up against this needlessly harmful bill. He broke ranks with his party to do it - when most did not. Flake wasn't that brave.
Posted by Jana Segal at 4:04 PM

Email ThisBlogThis!Share to TwitterShare to FacebookShare to Pinterest
Labels: rule that cuts pollution from oil and gas development.