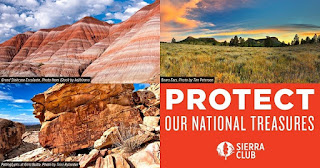 Tell Secretary of the Interior Ryan Zinke that our national monuments were created with overwhelming public support and must remain protected.

Donald Trump has issued an executive order requiring the Department of the Interior (DOI) to determine how to shrink or otherwise modify existing national monuments across the country. The Order requires DOI to review over 20 years of national monuments designated under the Antiquities Act. Utah's celebrated Bears Ears National Monument -- an unprecedented result of the proposal of the Hopi Tribe, Navajo Nation, Ute Mountain Ute Tribe, Pueblo of Zuni, and the Ute Indian Tribe -- will receive special attention.

The Antiquities Act was signed by President Teddy Roosevelt in 1906 to safeguard and preserve federal lands and cultural and historical sites for all people to enjoy. Since then, 16 presidents have used this authority to protect stunning landscapes, including the Grand Canyon, Acadia, Zion, and Olympic national parks. More recently, the Act has also been used to protect places like Bears Ears -- spanning 1.35 million acres in southeastern Utah and home to centuries worth of cultural artifacts including cliff dwellings, hogans, pictographs, and sites sacred to Native Americans.

Our public lands help define who we are as a nation. Instead of asking which parts of our history and heritage we could eliminate, the Trump administration should be asking how we can make our outdoors reflect the full story of our country.

Since Secretary of the Interior Ryan Zinke will lead the review process, let’s remind him that these national monuments were created with overwhelming public support and must remain undisturbed.